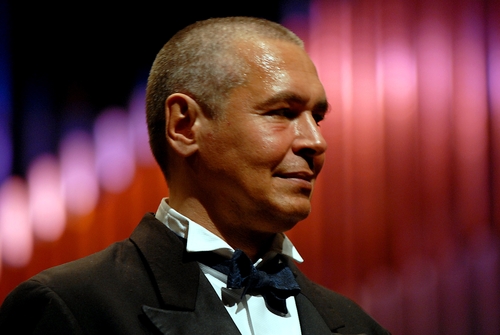 IVO POGORELIĆ, piano
Programme:
Johann Sebastian Bach: English suite No. 3 in G minor, BWV 808
Frédéric Chopin: Barcarolle in F sharp major, Op. 60
Frédéric Chopin: Prelude in C sharp minor, Op. 45
Maurice Ravel: Gaspard de la Nuit, M. 55
Who would dare say that we are exaggerating when we say that Ivo Pogorelić, one of the greatest pianists of today, will be playing on our stage in the new season of the Saturday at Lisinski cycle again! He started his successful international career after 1980, to be precise, after participation in the 10th Fryderyk Chopin International Piano Competition in Warsaw, where he was eliminated before the final for reasons not fully clarified to date. That controversial and unfounded decision resulted in the dissatisfaction of some jury members, who left the competition in protest; the renowned Martha Argerich explained her decision to leave by calling Pogorelić a genius! On the wings of the huge interest he attracted, thanks to his unconventional interpretations, amazing technique and innovative approach to pianistic works, Pogorelić has acquired the reputation of a pianist of extraordinary ability and, above all, of contemporary spirit. Accepting the invitations by numerous prestigious concert organizers, he started an intense concert tour around Europe, North America, Australia and Japan. His first appearance at New York's Carnegie Hall in 1981 was followed by sensational performances on the world's most important stages. He gave both recitals and concerts with renowned orchestras, such as the Berlin and Vienna Philharmonic Orchestras, the London, Boston and Chicago Symphony Orchestras, the New York and Los Angeles Philharmonic Orchestras, the Tonhalle and Concertgebouw Orchestras, and with the leading conductors such as Claudio Abbado, Seiji Ozawa, Charles Dutoit, Mariss Jansons...  He also did studio recordings at the same time.
His debut album Chopin Recital released by Deutsche Grammophon (1981) became the most sold album soon after its release, and the following year, he started continuously recording as an exclusive Deutsche Grammophon artist. Fostering the spirit of the European cultural tradition that he belongs to with his pianistic legacy and artistic contributions, Pogorelić continued performing capital works of the solo and concert literature on the stages of Europe, North and South America and the Far East.
In the recent years, the focus of his impressive repertoire, which he constantly adds new pieces to, has included extensive cycles by Schumann, Brahms, Debussy, Rachmaninoff, Stravinsky, Ravel and Chopin. The works of last two composers, along with Bach's Third english suite are on the programme of his next, eagerly awaited Zagreb concert at Lisinski Hall.