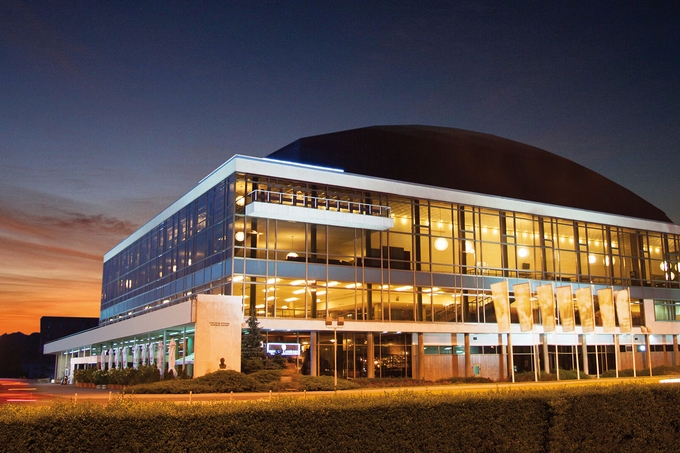 In 1957, the Zagreb Municipal Assembly, led by Mayor Većeslav Holjevac, decided to build a concert hall. Plans submitted by a group of architects – Marijan Haberle, Minka Jurković and Tanja Zdvořak – were accepted.

Construction of the Lisinski Hall began in 1961. Besides the architects and contractors, credit also goes to representatives of the city of Zagreb: Mayor Holjevac, President of the National Committee of the city of Zagreba, Ivo Vrhovac, President of the Zagreb Municipal Assembly; Stipe Milanović, President of the Committee for the Construction of the Hall; Ivo Vuljević, the first Director of the Hall and many other distinguished figures in the cultural and public life. The hall is named after Vatroslav Lisinski, the composer of the first Croatian opera, Love and Malice.

Although a free children’s program was presented on December 26, 1973, the official opening, entitled Zagreb Artists for the Zagreb Public, was held on December 29 and 30 of that year, in which all the performers, including the most distinguished ensembles and soloists in the country, donated their services to present a variety classical and popular music.

Since then, December 29 has remained the Vatroslav Lisinski Concert Hall Day, when a varied program, including concerts, exhibits and film projections, is offered throughout the day.

The production and organization of superb musical and also numerous multimedia events have assured the Vatroslav Lisinski Concert Hall the leading position in the concert activities of Croatia, as well as the immediate region. This temple of music is exceptionally aesthetically and acoustically designed, and features the latest technical equipment. Conceived as a multifunctional space, in addition to top concert events, the Hall organizes film premieres, interesting exhibits, and is often the host to international congresses and meetings, thereby systematically cultivating congress tourism while promoting the ecnomic and tourism potentials of Zagreb and Croatia. So far, Lisinski has been the venue for the Days of Oris (an international architectural symposium), the Forum of the Croatian Energy Society, European Day of the Entrepreneur (EDE), the Congress of the European Senior Organization (ESO), the Congress of Small and Medium-Sized Entrepreneurs, the World Congress on the Pathiophysiology of Pregnancy, the World Congress of Perinatal Medicine, the Adria Business Forum, the Congress of the European Academy of Childhood Disability (EACD), Opening Ceremonies of the International Healthy Cities Conference, the Congress of the International Society for the Performing Arts (ISPA), the World Peace Summit, the Opening of the 66th SKÅL World Congress, the South European Convention, Pliva Business Forum, Marketing Forum and the Grand Opening of the Meeting of the States-Parties to the Ottawa Convention.

This was recognized in the year 2007 when the Croatian Society of Musical Artists presented the Milka Trnina Award to the Lisinski Program Department.

For more than 45 years, the Vatroslav Lisinski Concert Hall has been synonymous with the finest musical performances. The series Saturday Night at Lisinski is a unique package consisting of a classical concert followed by an interview with the performers. This series has introduced the public to the most sought after ensembles and musicians in the world. The success of this series, which started in 1981, was affirmed by the City of Zagreb Award, presented to the Vatroslav Lisinski Concert Hall in 1989.