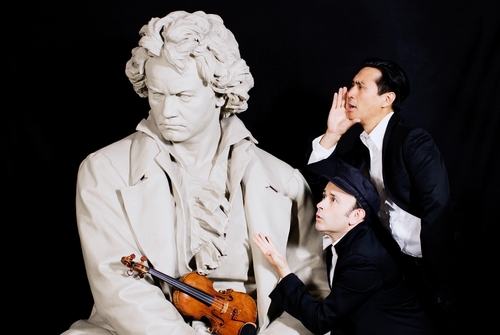 Millions of YouTube viewers can’t be wrong. Well, they can, but in this case they aren’t. On the contrary, with more than 45 million clicks, they’ve turned the inspired lunacy of musicians IGUDESMAN & JOO into an internet and international sensation. In their unique and hilarious theatrical shows, Aleksey Igudesman and Hyung-ki Joo combine humour, classical music and allusions to pop culture. They’ve performed with some of the world’s most famous orchestras, including the New York Philharmonic, the Chicago Symphony Orchestra, the L.A. Philharmonic, the London Philharmonic, the Zurich Tonhalle Orchestra and the Orchestra dell'Accademia Nazionale di Santa Cecilia, to name but a few.
Igudesman & Joo play Beethoven. That’s it. That’s the whole premise of this show. Some people do not like Beethoven. Some people are dense and do not realise how funny Beethoven is. Fortunately for those people, Igudesman & Joo are here to help (at least, with Beethoven’s humor. There’s nothing they can do about your taste).
Taking their cue from Franz Clement and Yehudi Menuhin, Igudesman & Joo will speak to the audience between movements upside down. And yes, there is evidence to support this strange performance practice: Franz Clement, the violinist who gave the world premiere of Beethoven’s Violin Concerto showed off between movements by playing his violin upside down. Then, Yehudi Menuhin, Igudesman’s and Joo’s mentor, conducted Beethoven with the Berlin Philharmonic while doing a headstand. If this isn’t enough to convince those of you worried about historically informed performances, we’re not sure what could be!
What will they speak about? Well, wouldn’t you like to hear—no offense, Ludwig. Why did Beethoven dunk his head in cold water every day, you ask? Why did he love to throw soup around? Was his favorite fruit really “Ba-na-na-naaaaa”? If you didn’t understand those questions, especially that last one, you definitely need to come see this show.
The program will include Sonatas for Piano and Violin by Ludwig van Beethoven: Nos. 1, 2, 3, 4, 5, 6, 7, 8, 9 and 10. We’ll stop at number 10, not because we want to but because we have to. Even Beethoven stopped at 10... Because he died...
Program will also include a very unique transcription of a Piano and Violin Sonata, for when the pianist forgets to show up, and, of course, variations on Beethoven’s greatest masterpiece, his finest work, his magnus opus: Für Elise.
This show is written, composed, and conceived by Igudesman & Joo.
Aleksey Igudesman plays with a bow made by the Boston-based bowmaker, Benoit Roland, and on a Santo Seraphin violin from the year 1717, which is kindly loaned to him by ERSTE BANK. Aleksey Igudesman plays on handmade strings by Thomastik Infeld. Hyung-ki Joo is a Steinway Artist. Aleksey Igudesman and Hyung-ki Joo wear clothing by CLEOFE FINATI – Haute Couture 100 % made in Italy.
For more information please visit www.igudesmanandjoo.com
Photos: Julia Wesely