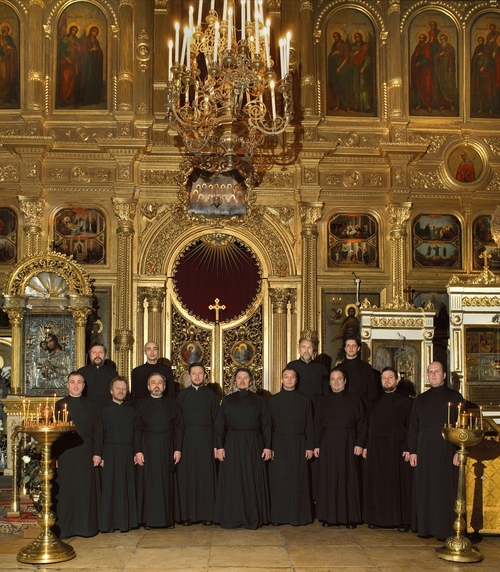 The concert has been cancelled due to imposed restrictions of large gatherings.
Refunds are available from March 29 at the Lisinski hall box office.
For the current subscribers who do not want a refund, a reduced subscription for the same amount is provided for the next concert season 'Saturday at Lisinski'.
Thank you for your understanding.
THE RUSSIAN PATRIARCHATE CHOIR OF MOSCOW
ANATOLY GRINDENKO, artistic director
Programme: to be announced later
Twelve monks committed to God, the Russian Patriarchate Choir of Moscow, and their director and founder Anatoly Grindenko are gladly returning to the Zagreb audience, which will for sure receive it with as much enthusiasm!  In almost four decades of its existence, the ensemble has drawn on and presented the exuberance of the tradition of the Eastern, Christian, Orthodox and Russian spiritual and secular music.
An invaluable, brilliant gem, this choir revives many forgotten manuscripts with its musicological and exploratory discoveries and transforms them into sound by its excellent vocal artistry, while trying to keep the originality and emotionality of the Russian traditional songs, completely avoiding any hint of kitsch. Its artistic quality brought it fame and invitations to numerous international tours and festivals held in Utrecht, London, Maastricht, Barcelona, Ravenna and Nancy… as well as to the concerts in the United States of America and Japan.
The choir is not accompanied by any instruments, but the singers still have successful collaborations with instrumental ensembles in the programmes, in which chamber and orchestral pieces take turns with a cappella vocal music. For instance, renowned Finnish conductor and violinist Jukka-Pekka Saraste has prepared a brilliant programme, in which Russian Orthodox music is performed with seemingly disparate orchestral pieces, such as Schubert's Unfinished Symphony or Arvo Pärt’s Tabula Rasa.
Thanks to the Russian Patriarchate Choir of Moscow, older periods of Russian spiritual music are no longer just a subject of musicology research, which will then reach concert stages, but they also return to their original context of liturgical music-making. We are certain that this music gem will attract great interest, as it did for their last concert in 2016, when around 200 additional visitor seats were put on the stage!
Lisinski Hall did it to please as many visitors as possible and provide them with an intense artistic experience of the authentic and powerful sound created by the Russian Patriarchate Choir of Moscow.